Hello, it's me.  It's been a while - as you can see.  Life, you know. It just gets messy.  Busy.  Crazy. But I feel it is time for a change.  Time to put less effort into doing everything for other people at the expense of doing for myself.   Time for more effort on behalf of myself, while I still have that privilege.

Recent events have helped me to make this decision.

You see I was fooled.  And given that I pride myself on being an intelligent person who keeps herself informed and educated about the world around me, it seemed to me that if I had been fooled so badly, that I therefore must not be so intelligent after all.  Who wants to admit when they realize they have been taken for a ride?  When the wool has been pulled over your eyes.  When someone has taken advantage of you by telling you lies, and you fell for it.

I felt foolish.  I felt angry.  I felt downright stupid.

But then I realized something:   The only way I am the fool in all of this is if I hide away and let myself feel stupid and take the blame for being "foolish".  I was not the one who lied. I was not the dishonest one.  I was actually completely honest.  The guilty party is the liar, not me.   They knew I was going to act with integrity and they knew I would do exactly what I promised to do.  They saw a way to use this to their advantage. They told lies and made promises they never intended to keep.  Sure, I can see it all so clearly now. Hindsight is indeed 20-20. But the liars are the ones who should be ashamed. Not me.

Of course they won't be ashamed because they are not good people. If they had a conscience they would not lie and deceive in the first place. At best they will be inconvenienced by the fact that they have been caught out.  But that is a whole other story.

This scenario of being fooled applies to all relationships, personal, social , business - every
relationship should be able to be trusted, but the fact is every relationship may not be worthy of trust. Even in a business relationship that includes a written contract, that contract could be still broken, lies can be told, dishonest behaviour can't be shielded by a contract. Do not be fooled into thinking that it can.  And do not be fooled into thinking that if you do have a written contract that it will protect you. The old adage 'a contract is only as good as the paper it is written on' is quite true.  If you have a breech in a written agreement that may give you course of action. But fighting a breech of contract costs money. What if you have little and the liar has plenty.  You have to decide if it is worth the financial outlay to pursue it.  Sometimes it is.  In that case, I say fight.   But if it is simply not practical, then the best you can do may be to tell the story.  At least let other people know what happened. It is important that the truth be told, and you may also be helping to protect someone else from the same trap in the future.

But to do that you have to admit that you were fooled. And when you are feeling like an idiot, that can be a difficult thing to do.  Who wants to stand up and admit - I was foolish?

But that is when I realized, I was not foolish.  I was fooled, and there is a difference.

Being Fooled vs Being Foolish

There is no shame in being fooled by someone. It is not a failing to trust what someone tells you. Especially if they are skilled at their dishonesty and you simply believed in all good conscience that they were genuine. It does not mean you are a fool, it only means they are a good liar. If someone fools you once, the shame is on them.

But when you realize what has happened you owe it to yourself to admit it and accept that you have been fooled.  If you let yourself be afraid of being seen as a fool, and you refuse to admit what has happened, then you are letting them get away with it. That is how they fool you twice, and then it is shame on you.

So admit what has happened. But do not blame yourself.  You're only being foolish if you let them get away with it by accepting the blame and being too afraid to call them out on it.

And after all is said and done, try your best not to let the experience make you distrust people in the future.  Be cautious, always, but do  not let the bad guys make you bitter. And most of all, realize that there is a difference in being fooled and being foolish. 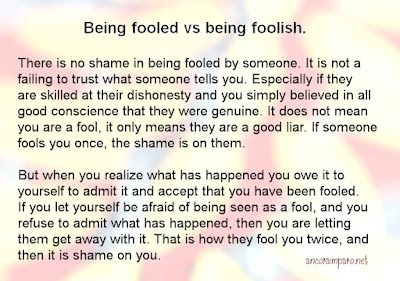